Here at RPGFan, we like to do things a little differently sometimes and bite our thumbs at chronology. Released three years ago, Minamizawa's first guitar solo album of the famed Final Fantasy series features staple picks one is likely to find on almost any remix album: "Aerith's Theme," "To Zanarkand," an array of battle themes, "One-Winged Angel," and "Eyes On Me," to name just a few.

Those with a full library may dismiss this album simply on the basis of repetitive track selection, but who are we kidding? You're going to buy this one.

Though the tracks offered here leave little to the imagination in terms of novelty, Minamizawa's love and respect for Uematsu's work shines through as he hits every note perfectly with an energy sent straight to your ears. Precision and heart only scratch the surface, however.

With slight deviations that leave his mark on each track, you can appreciate Minamizawa in his own right. Do not be mistaken; this is no faceless devotee to an already successful assortment of music. 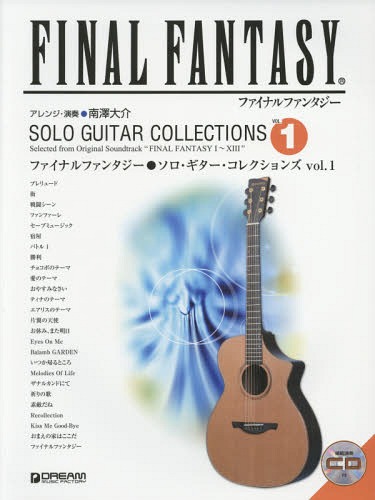 Minamizawa holds talent appropriate to someone allowed to recreate Uematsu's work, if only slightly. But we're not here to prattle on about the performer — let's get to the music! What track best suits the introduction to the first of three guitar solo albums dedicated to the Final Fantasy series?

I kid, obviously. The prelude greets us as is tradition with several arrangement albums.

Here, we experience the quality of the catalogue to follow at the mark. Have a listen for yourself.

All of these are in Japanese of course, which make reading the Playing Advice and the chord diagrams hard for those of us who are not fluent. Song List both the book and the cd : 1.

Minamizawa holds talent appropriate to someone allowed to recreate Uematsu's work, if only slightly. Location: United States Joined: Jul 17 I imported this last November pretty much right after this topic was made , and I have to agree that it is mostly beginner stuff. Great BOOK!

Rest assured, no fillers clog this collection. Again I use Aerith's theme as an example in that it is actually similar to parts of theDoomOfAllFires version but missing some notes and in a different octave.