The date back version or a version with a lens will cost more. Internationally there are three versions just in black. The regular one is the F The F80D imprints the date. The F80S imprints the date and also prints exposure data in between frames. You can see them all in the brochure here. Personally I'd prefer the simplest one without any imprinting. It's not only very popular as a film camera, but it's also been converted into many different models of digital camera.

Scanning the film from this N80 can give much better quality images than any of those digital cameras. I read here that the durability of the Kodak DCSn is 30, photos, so that's probably the rating of the N Honestly I forget and don't care what the rating for the pro Nikons is.

Are you really going to wear it out? I don't think so.

On the other hand, I've already made that many shots on my D1H, so I'd watch out for that Kodak camera. As you should realize, shutter cycle ratings are much more important for digital cameras than film, since I doubt anyone who buys an N80 will ever come close to 30, exposures or 1, rolls of film.

This is a swell little plastic camera. Except for it's slow flash sync speed, it has all the features you'd ever need for great photography.

It is smaller, lighter and less than one-half the price of the F whose features it appears to duplicate or even improve upon. If you're a serious amateur photographer considering this camera then by all means get it: it was designed for you.

The more expensive cameras really have no benefits for you other than additional weight, durability and the important flash sync speed if you use fill flash in daylight.

Read here why sync speed is important. Get an F if you need to use IR film. The N80 therefore has no need for the stupid remote electronic connector Smoother, quieter shutter with less image-blurring recoil Tiny pop-up flash ultra-wide-angle and wide zoom lenses may cast shadows in your picture though Dedicated knob to select P, S, A, or M exposure modes Built-in focus assist light.

Manual lenses are almost useless on it except if you have a separate meter.

You may be able to do TTL macro flash with it, in which case this is not a downfall. The plastic knobs fall off Canon's A2 camera, I suspect the external command dials will fall off the N80 if you beat on it. Nikon should have made the LCD illuminator button do double duty here. In short, the basic handling of this camera is comfortable and practical. In general, it behaves just like a low-cost F Nikon still hasn't gotten around to fixing a couple of minor mistakes, however.

As with the F, you get a plastic eyepiece cap instead of a built-in viewfinder shutter. This is perhaps forgivable given the price of the camera, but we still have those crazy custom functions that require either a cheat sheet or memorization.

I'm talking about nearly zero difference in virtually every situation I tried. That means that, while the meter is every bit as accurate, the camera can't always set an exact exposure--your exposure could be rounded a sixth to a fourth of a stop. If you're shooting print film, this difference is not enough to even spend ten seconds thinking about.

That said, I didn't find any slide exposures that I was uncomfortable with. And you can always dial in exposure compensation or turn on the auto bracketing, if you're really worried.

Autofocus Go read the section on autofocus in my F review. The F and F5 have much better low-light and horizontal sensitivity in the left and right sensors. On those pro cameras, this translates into less focus hunting in a few situations. If you shoot wildlife, the F is a better choice. If you mostly shoot static shots, this slight difference isn't going to bother you.

Drawbacks Build Quality. Ya gets what ya pay for. I've managed to scuff up my F in my backcountry forays, but I've never worried about dust and water getting into the camera. That, coupled with the weak internal flash don't make for as much flexibility as I'd like. Moreover, the built-in flash can't be used with virtually any zoom that goes wider than 28mm due to its position so close to the prism. Manual lenses. That's a shame, as I'd love to take my Series E lenses with this body to save weight on backpacking trips. 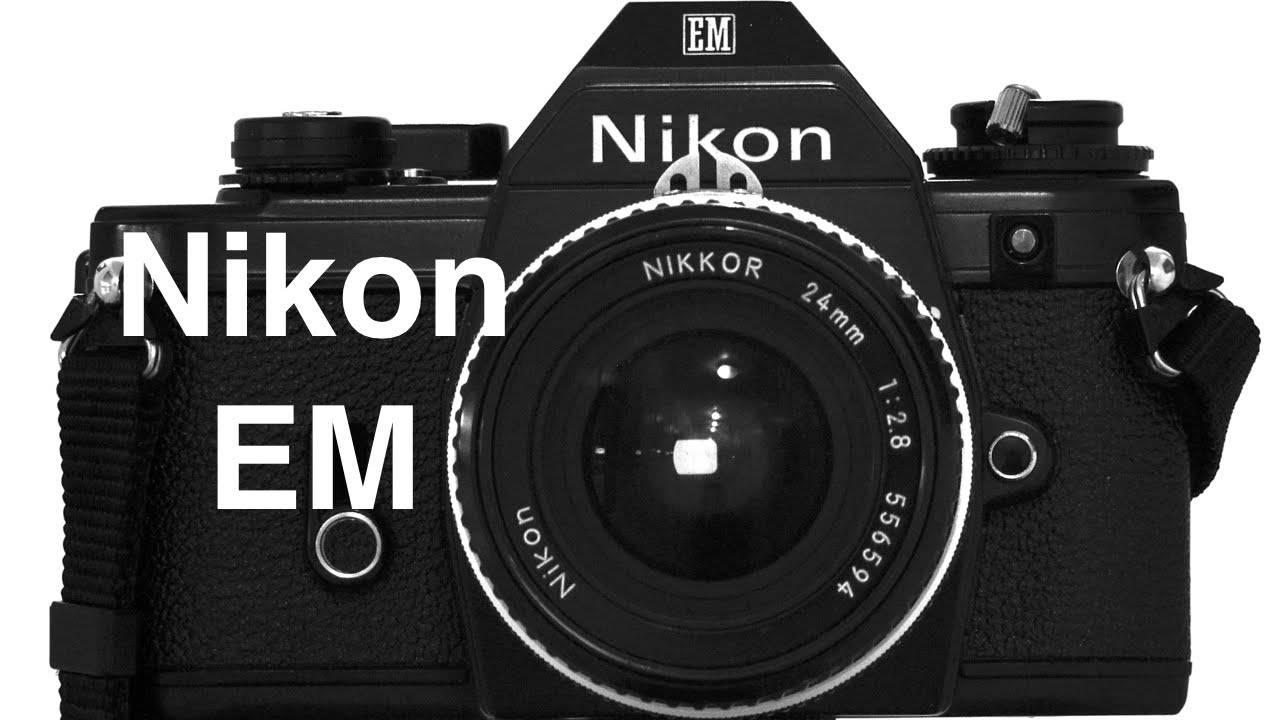 Positives Bang for the buck! Nikon has finally given us a fully featured, remarkably advanced SLR at a consumer, not pro price. Depth of field preview and gridlines in the viewfinder. Both features are remarkably useful. NH writes: I usually try to get more camera than what I need.

I have an F3 and it is comforting to know it'ts overengineered for my needs. I wanted to get an autofocus Nikon and settled for the N As I try to look after my cameras, I think it will last, at least in my hands. I think to be able to do what the F does at a fraction of the cost is a good thing.

The main drawbacks are that the camera cannot make good use of my manual lenses, and the camera is not as dust resistant as I would like it to be. 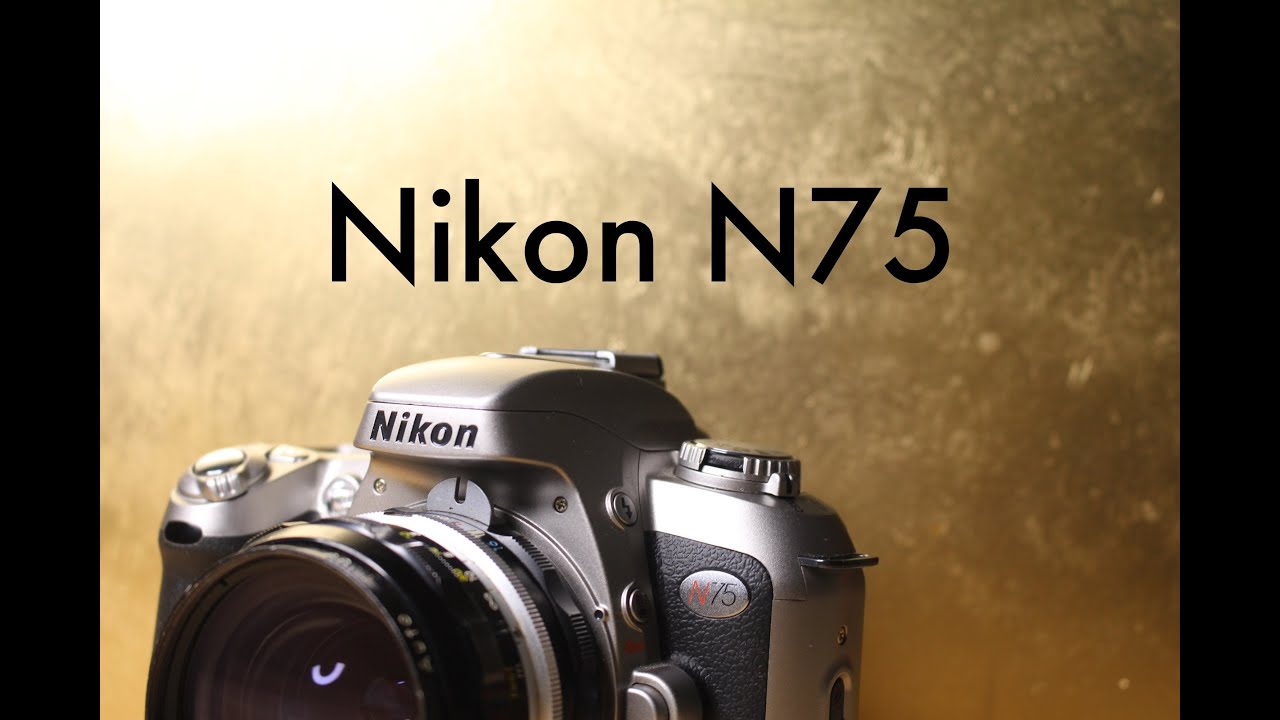 Much criticism has come the N80's way. Mainly it centers around the fact that it is not a pro camera.

However it was never meant to be and as you stated in your article; it is making the lower end more user friendly, as have been most of upper priced Nikons. Several site visitors have complained about my apparent snub of polycarbonate in the text of the review.

I've gone back and clarified that section--it's not the use of polycarbonate I object to, it's the flimsiness of the control pieces.

The number of reports I hear of these pieces falling off is disturbing. Each of these bodies had one or two useful features of its own, but never have I seen all the features that I really want from Nikon in one body.

That said, I have to say that although the F80 isn't perfect, I really enjoy it. However, there are a couple of things that I've discovered about its personality that really annoy me.

Interestingly, no review that I've come across to date has ever mentioned these, and a call to Nikon Canada didn't help resolve these issues either.

This is annoying when you are doing portraits, or need to get critical about DOF. Why not? What's up with that?

I don't think I'm being picky. I believe the four problems I outlined above are serious flaws that somehow slipped through the testing phase at Nikon.

I hope the next update to the F80 addresses these flaws. If so, I'd buy into it.There is a distinct shutter lag compared to the pro bodies. It is smaller, lighter and less than one-half the price of the F whose features it appears to duplicate or even improve upon. The F80S imprints the date and also prints exposure data in between frames. Basic Operation The shooting modes explained in this section cover most of your shooting situations. 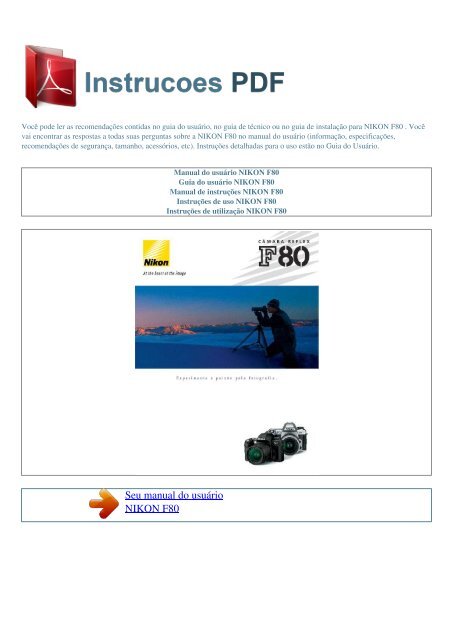 In short, the features may be professional, but the build quality is mid-level consumer. Film automatically advances to the first frame. Shooting In Each Exposure Mode Suited for situations such as when taking a snapshot, where you want to concentrate only on the shutter release opportunity.

Already you see people referring to it as "the poor man's F Page 11 - blinks in the LCD panel and viewfinder, and the shutter cannot be released. As with the F, you get a plastic eyepiece cap instead of a built-in viewfinder shutter.